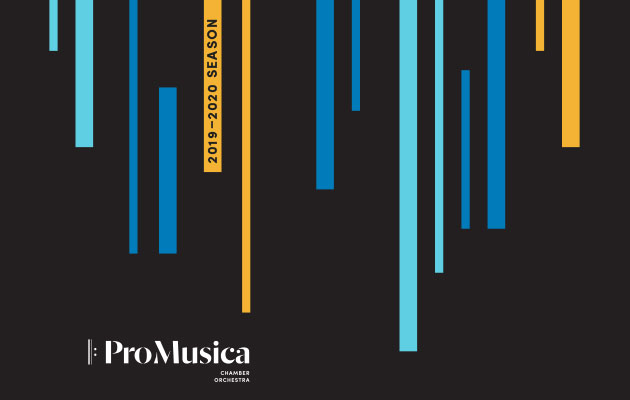 In the 41st season, ProMusica will feature world-class, multifaceted artists who excel not only as soloists, but as composers and leaders. In addition, ProMusica will debut a new commission – its 68th – and three premieres.

“After a successful and celebratory 40th anniversary, it is important that ProMusica continues to push our artistic boundaries with commissions and new music, said Music Director David Danzmayr. “We have made a deliberate choice to feature 21st century compositions on each of our subscription concerts this season, continuing to highlight artists who are composing today,”

Executive Director Janet Chen added, “We will feature three Composer/Performers and present our 68th commission this year. People now expect to hear something new at all our concerts — balanced alongside our exciting performances of the classical masters. Our 41st season will continue to invite exploration of the music performed and invite audiences to feel even more connected to the ProMusica experience.”

SUBSCRIPTION SERIES AT THE SOUTHERN THEATRE

ProMusica’s Creative Partner and Principal Guest Artist, violinist Vadim Gluzman, will lead the orchestra with a program by the great Viennese masters –– Mozart, Beethoven and Mahler. Pēteris Vasks’ Musica Serena adds the shimmering sounds of our strings, offering harmony for the modern world.

Beethoven’s String Quartet No. 11 in F Minor, “Serioso”, as arranged by Gustav Mahler, will open the concert. In addition, Gluzman and the orchestra will present two Mozart pieces: Violin Concerto No. 4 and Symphony No. 25. Sunday, Oct. 13.

ProMusica continues the “Composer/Performer” project for the seventh season as Richard Scofano debuts the U.S. premiere of his own work, IBERÁ Concerto for Bandoneón and Orchestra. Deeply influenced by his Argentinean roots, Richard Scofano is a virtuoso of his instrument and one of the world’s leading bandoneón players.

Two works by Franz Schubert’s work this concert — his dark Unfinished Symphony is complemented by his charming and energetic Symphony No. 3, which both share influences of Austrian folk music. Saturday, Nov. 2 and Sunday, Nov. 3.

Scottish percussionist Colin Currie appears with ProMusica for the Ohio premiere of Helen Grimes’ Percussion Concerto. Dubbed by Spectator Magazine as “the world’s finest and most daring percussionist,” Currie returns to Columbus by popular demand following an appearance 2013.

Music Director David Danzmayr taps into his Austrian roots with one of Mozart’s best-known works, his Great G Minor Symphony. Sparkling works by Corelli and Traetta balance the program for a joyful evening of brilliance and delight in the spirit of the holiday season. Saturday, Dec. 14 and Sunday, Dec. 15.

Acclaimed for her grace and sparkling expression, Esther Yoo makes her ProMusica debut with Tchaikovsky’s Violin Concerto — one of the most celebrated works of the violin repertoire. Twenty-four-year-old Yoo, an American of Korean descent, served as the first-ever Artist In Residence with the Royal Philharmonic Orchestra in 2018 and was recently listed as one of Classic FM’s “Top Thirty Artists Under 30.”

From the early classical sounds of Haydn to the contemporary work of Golijov, the evening also features the beautiful Elegie, composed by ProMusica’s music director’s father, Wolfgang Danzmayr—a work that was a childhood favorite of David’s. Saturday, Jan. 11 and Sunday, Jan. 12.

Mozart composed his first symphony when he was eight years, and his last symphony at the age of 32. Experience the sounds of his remarkable musical path from child prodigy to adult genius, with Symphony No. 1 and Symphony No. 41, “Jupiter.” David Danzmayr and Creative Partner, violinist Vadim Gluzman share the stage once again for Mendelssohn’s renowned Violin Concerto.

Also, cellist and composer Joshua Roman returns with his second Composer/Performer and ProMusica-commissioned composition, Double Concerto for Violin, Cello and Orchestra, that will feature Roman and Gluzman as soloists. The world premiere takes places on Saturday, April 4 and Sunday, April 5.

Caroline Shaw – violinist, vocalist, and composer– makes her ProMusica debut with three of her compositions: Blueprint for String Quartet, Is A Rose and Entr’acte for String Orchestra. Shaw, the youngest Pulitzer Prize winner for Music in 2013, is one of the most inventive and engaging performers of today.

In keeping with the theme of this season’s concerts, pairing the new with the classic, Brahms’ majestic Symphony No. 1 offers a triumphant end to the season. Saturday, May 9 and Sunday, May 10.

The Worthington Series is a four-concert series in the intimate setting of the Worthington United Methodist Church, which showcases both the full orchestra and smaller chamber ensembles of ProMusica’s musicians who curate their own programs.

The annual holiday tradition continues with the Messiah Side-by-Side Sing-Along on Friday, Dec. 13, hosted by The Ohio State University’s Director of Choral Studies, Robert J. Ward at the Southern Theatre. Raise your voice in song with friends, family, and church choirs, and sing selections from Handel’s Messiah. Orchestra students and area music directors join ProMusica musicians on stage for this joyful community event.

The annual ProMusica Soirée will take place on Saturday, Feb. 1. ProMusica’s biggest event of the year pairs a party in the historic ballroom of The Westin Great Southern Columbus with a collaborative concert at the Southern Theatre. Guest artist details to be announced!

The popular NAKED CLASSICS series returns for a fourth season. NAKED CLASSICS is a different kind of concert experience—masterpieces get undressed and deconstructed by presenter and host Paul Rissmann. Through graphics, live excerpts, and chats with our musicians, we’ll uncover some of the secrets in the score, while exploring the composer’s life and times. At the end, you’ll hear the works performed in their entirety, offering a new perspective of the work. NAKED CLASSICS is for everyone, from frequent concert-goers to those curious about the orchestra and its repertoire, wanting to discover more.

NAKED CLASSICS: Mozart – Journey of a Genius
Friday, April 3: Mozart wrote his first symphony at the wondrous age of eight years old, and his last symphony at the age of 32. Host Paul Rissmann plots the fascinating development of a child prodigy to an adult genius.

SEASON TICKET SUBSCRIPTION (AND SINGLE TICKET) INFORMATION
Subscription Series packages for the 2019-20 season, ranging from $62 to $282, are currently on sale. Special events are also available as add-ons to subscription packages. Single concert tickets, $15 to $55, will go on sale on August 12, 2019. Subscriptions, single tickets, and more information are available through the ProMusica office (614) 464-0066 ext. 101; www.promusicacolumbus.org) or through Ticketmaster.