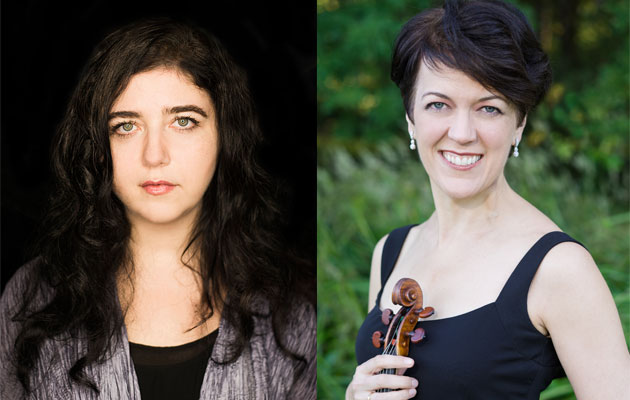 (Columbus, OH) –ProMusica will debut its 64th commissioned piece during its Sketches of Vienna performances on Saturday, April 22, at 5:30 p.m., and Sunday, April 23 at 7:30 p.m. at the Southern Theatre. Composer and pianist Lera Auerbach returns to Columbus to present her new work A Twofold Dream, a new spin on Mozart’s Concerto for Flute and Harp, K. 299 that will feature concertmaster Katherine McLin as solo violinist along with Auerbach herself as piano soloist.

The concert opens with Johann Strauss II’s Roses from the South, a stunning compilation of waltzes from Austria’s beloved “Waltz King”. A native of Austria himself, Music Director Danzmayr is known for his delightful interpretations of Viennese waltzes. The orchestra, led by Danzmayr, will round out the Viennese-themed program with the latest installment of its Schubert Cycle with Symphony No. 10 — a set of Franz Schubert’s piano sketches which were fleshed out and brought to life by renowned orchestrator Brian Newbould.

“Presenting new works for chamber orchestra has been an important part of ProMusica’s mission, and the Composer/Performer Project is a very special way to introduce our audiences to these living composers, showcasing their talents,” said ProMusica Executive Director Janet Chen. “We are thrilled to welcome Lera Auerbach back to our stage. The ProMusica Chamber Orchestra continues to champion new artists to make classical music vibrant and current in the 21st century.”

The Composer/Performer Project was launched in 2014 with pianist and composer Lera Auerbach. The Russian-American composer and concert pianist is one of today’s most-sought after and exciting creative voices. Auerbach’s intelligent and emotional style has connected her to audiences around the world, and her work is promoted by today’s leading performers, conductors, choreographers, choirs and opera houses.

In 2015, Auerbach was composer-in-residence at the Trans-Siberian Art Festival and the Rheingau Musik Festival in Germany. Past residencies include the Staatskapelle Dresden, Switzerland’s Verbier Festival, Norway’s Trondheim Festival, the São Paulo Symphony in Brazil, and Marlboro Music Festival in the USA. Awards include the Hindemith Prize, a Golden Mask, Paul and Daisy Soros Fellowship, German National Radio prize and the ECHO Klassik award. In 2011, her opera GOGOL marked the first time a major opera written by a female composer was produced in Vienna. Her work is published exclusively by the Internationale Musikverlage Hans Sikorski. Her music is available on Deutsche Grammophon, Nonesuch, BIS, Cedille and other labels.

Violinist Katherine McLin enjoys an extremely varied and prolific performing career as a concerto soloist, recitalist, and chamber and orchestral musician. Since her debut with the Oregon Symphony at the age of fifteen, Dr. McLin has made more than 100 appearances as soloist with orchestras across the country. Dr. McLin appears on 20 compact disc recordings under the Summit, Centaur, and Opus One labels.

As a member of the McLin/Campbell Duo with pianist Andrew Campbell and frequent chamber music collaborator with colleagues around the world, Dr. McLin performs extensively throughout the United States and abroad. She serves as concertmaster of ProMusica and resides in Phoenix, AZ where she is on the faculty of Arizona State University.

SEASON TICKET SUBSCRIPTION (AND SINGLE TICKET) INFORMATION
Tickets for the Sketches of Vienna concert can be purchased for $12 to $50. “Flex Series” subscriptions are still available for the remainder of the 2016-2017 concert season starting at $150. Subscriptions and single tickets are on sale through the ProMusica office (614-464-0066; www.promusicacolumbus.org) or through Ticketmaster.