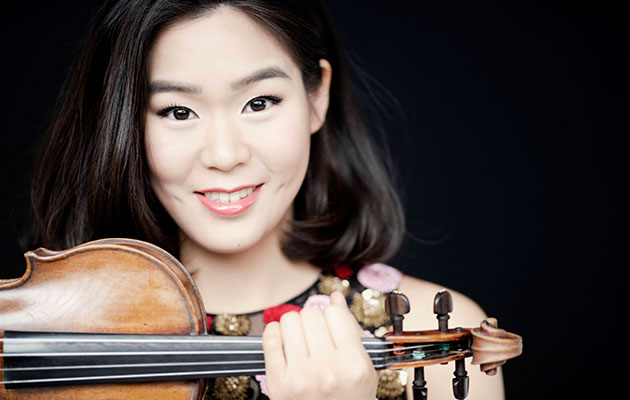 (Columbus, OH) – Internationally acclaimed rising star violinist Esther Yoo makes her ProMusica debut with a performance of Tchaikovsky’s Violin Concerto — one of the most celebrated works of the violin repertoire — on Saturday, Jan. 11, 2020 at 5:30 p.m. at the Worthington United Methodist Church, and Sunday, Jan. 12, 2020 at 7:00 p.m. at the Southern Theatre.

The concert begins with a work by Argentinean composer Osvaldo Golijov, as ProMusica continues the season’s theme of including a piece composed in the 21st century on every program. Golijov’s ZZ’s Dream, a favorite work of Danzmayr’s, was composed in 2008. Next, guest artist Esther Yoo takes the spotlight with Tchaikovsky’s Violin Concerto, a piece that is typically performed by larger symphony orchestras, though Danzmayr and Yoo feel it will work well in a more intimate setting.

Next, the orchestra will present the beautiful Elegie, a piece originally written for piano by David’s father, Wolfgang Danzmayr – these will be the first public performances of the orchestrated version. The program closes with Joseph Haydn’s Symphony No. 75 – a shorter work that Danzmayr describes as “Haydn at his best” – written in the late 18th century.

“We are delighted to have Esther Yoo joining us for our January concerts – she is a stunningly talented violinist, at just 25 years old,” said Executive Director Janet Chen. “That, and having the opportunity to premiere the orchestration of ‘Elegie’ by David’s father, is going to make for a really special concert.”

In an era when technical perfection is a given, the spotlight inevitably shifts to interpretation, and Esther Yoo’s playing has been described as “mesmerizing,” “soulful,” “spellbinding,” “intensely lyrical,” and “taking her audience into an enchanted garden.” She performs regularly with many leading conductors – including Vladimir Gustavo Dudamel, Esa-Pekka Salonen, Thierry Fischer, Vasily Petrenko, Karina Canellakis and Andrew Davis – as well as orchestras such as the Philharmonia, Los Angeles Philharmonic, BBC Symphony Orchestra, Seoul Philharmonic, Deutsche Radio Philharmonie and the Royal Liverpool Philharmonic. She has also performed at a range of prominent festivals including the BBC Proms and Aspen Music Festival.

SINGLE TICKET AND SUBSCRIPTION INFORMATION
Single tickets to any regular season concert – ranging from $16 to $58 – are on sale now. Subscription packages including a Flex Series and the Worthington Series are still available for the 2019-20 season. Subscriptions and single tickets are available through the ProMusica Box Office (614-464-0066 ext. 101; www.promusicacolumbus.org) or through Ticketmaster.