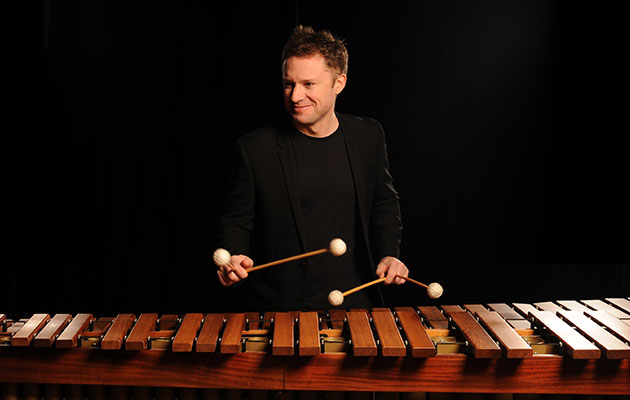 (Columbus, OH) – Music Director David Danzmayr and ProMusica Chamber Orchestra welcome back percussionist Colin Currie for December’s subscription series performances. The orchestra will present one of Mozart’s best known pieces, Symphony No. 40, along with two 18th century works, Arcangelo Correli’s Christmas Concerto and Tommaso Traetta’s Overture to Armida. The program is complimented by an Ohio premiere of a contemporary concerto for percussion. Additionally, the weekend kicks off with the annual tradition of the community-oriented performance of the Messiah Side-by-Side Sing-Along.

Tomasso Traetta’s Armida Overture will begin the concert, followed by Colin Currie performing the Ohio premiere of Helen Grime’s Percussion Concerto. Next, the orchestra will present Correli’s Christmas Concerto, commissioned by Cardinal Pietro Ottobon – a great patron of music and arts — and published posthumously in 1714. Finally, Music Director David Danzmayr taps into his Austrian roots with one of Mozart’s best-known works, Symphony No. 40, also known as his Great G Minor Symphony.

“Our December weekend offers a great balance of old and new,” said Executive Director Janet Chen. “We’re thrilled to be working with Colin Currie again on a new work, and the selections of early Baroque pieces are festive and evocative of the holiday season in their own ways. That combined with our annual Messiah Sing-Along, will make for a fantastic weekend of music that could only take place here on stage with ProMusica.”

Percussion master Colin Currie has appeared with ProMusica under David’s Danzmayr’s direction once before, in 2013, and Currie and Danzmayr have performed together many times in Scotland since. Hailed as being “at the summit of percussion performance today” (Gramophone), Currie is the soloist of choice for many of today’s foremost composers, performing regularly with the world’s leading orchestras and conductors. From his earliest years, Currie forged a pioneering path in creating new music for percussion, winning the Royal Philharmonic Society Young Artist Award in 2000, and receiving a Borletti-Buitoni Trust Award in 2005. Currie previously performed the world premiere of Grime’s Percussion Concerto with the London Philharmonic Orchestra.

Kicking off the weekend, the ProMusica Chamber Orchestra will once again present the annual, interactive community event, the Messiah Side-by-Side Sing-Along. This joyful holiday event has been a ProMusica tradition for many  years, and is a community favorite. This year’s host is The Ohio State University’s Director of the School of Music William Ballenger.

High school orchestra students, area music directors, church choirs and others will share the stage as Ballenger and the ProMusica Chamber Orchestra will feature excerpts from Handel’s Messiah. Audience participation is, as always, openly welcomed and encouraged!

SINGLE TICKET AND SUBSCRIPTION INFORMATION
Single tickets to any regular season concert – ranging from $16 to $58 – are on sale now. Messiah Side-by-Side Sing-Along tickets are $24 general admission. Subscription packages, including a Flex Series, and single tickets are available through the ProMusica office (614-464-0066 ext. 101; www.promusicacolumbus.org) or through Ticketmaster.