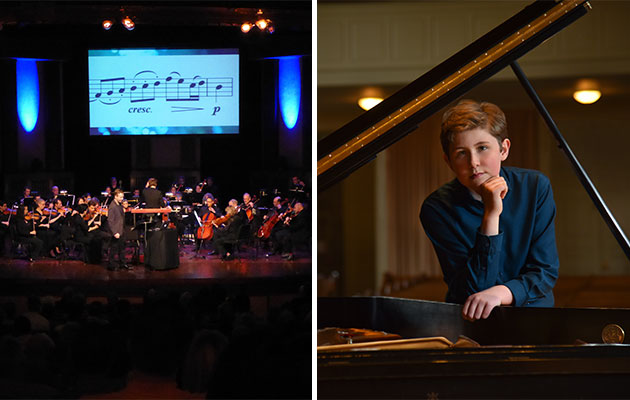 (Columbus, OH) – Music Director David Danzmayr leads ProMusica Chamber Orchestra as Westerville native and rising star pianist Gavin George makes his debut with the orchestra performing Mozart’s Piano Concerto No. 21, for ProMusica’s April subscription concerts. Works by Stravinsky and Beethoven also anchor this classic program featuring these three musical greats. In addition, host and presenter Paul Rissmann, along with David Danzmayr and the orchestra, will offer additional insight into Stravinsky’s Pulcinella Suite—through dissection, reconstruction, and explanation to enhance the listener’s appreciation of the work—with the next iteration of the popular NAKED CLASSICS series.

The music of Igor Stravinsky’s Pulcinella was originally composed for a neoclassical ballet based on an 18th-century play, and was intended for a chamber orchestra of the size of ProMusica. Fittingly, the orchestra and Paul Rissmann will guide audience members through discovery of the colors, intriguing stories, and musical origins of the work–deepening their appreciation–as the composition is explored and explained in NAKED CLASSICS: Stravinsky’s Pulcinella.

Paul Rissmann—the renowned music educator, performer and composer—returns for a second season of NAKED CLASSICS with ProMusica, presenting during the first half of the two-part program. Using digital projection, live musical excerpt demonstrations by the orchestra, and interviews with the musicians on stage, Rissmann guides the audience by  not only exploring the historical background of Pulcinella, but he also investigates the work’s construction in a way that is easy for concert-goers to understand and relate to. Rissmann’s approach delves deep into the music, uncovering secrets. In the second half of the program, the orchestra performs Stravinsky’s Pulcinella in its entirety, giving audiences new insight into the work.

NAKED CLASSICS: Stravinsky’s Pulcinella is supported by the Ohio Arts Council and the Shackelford Family Fund.

The Stravinsky & Beethoven program will begin with the next installment of ProMusica’s two-year Beethoven Symphony Cycle with Beethoven’s Symphony No. 1 in C major, Op. 21 and concludes with Stravinsky’s Pulcinella.  The performance also showcases local, fourteen-year-old, and piano prodigy, Gavin George playing Mozart’s Piano Concerto No. 21.

“ProMusica has always made it our mission to seek out young talent by inviting rising stars to perform with our orchestra,” said ProMusica Executive Director Janet Chen. “Gavin is an exceptionally talented pianist, who just happens to be from Central Ohio. We are thrilled to have him join us at the Southern Theatre, and Mozart’s Piano Concerto 21 is a work that can showcase his artistry.”

A native of Westerville, fourteen-year-old Gavin George began formal piano instruction at age three and made his concerto debut at age seven performing Haydn’s Concerto in D Major. As a gold medal winner for two consecutive years in the American Association for the Development of the Gifted and Talented International Piano Competition, George performed multiple times in Carnegie Hall and was awarded a full scholarship to study and perform at the Vianden Music Festival in Luxembourg. In 2011, he was awarded first prize in the SAA’s International Piano Concerto Competition performing Beethoven’s Piano Concerto No. 3. He was selected as one of the PRODIGIES series documentary profiles appearing on the YouTube THNKRTV channel, and has been a featured performer on both the CBS Early Show and The Queen Latifah Show.

SINGLE TICKET AND SEASON SUBSCRIPTION INFORMATION
Tickets for NAKED CLASSICS: Stravinsky’s Pulcinella are $25 each for general admission. Single tickets for Stravinsky & Beethoven range from $12 to $50. Limited subscription packages are still available for the remainder of the 2017-18 concert season with a Flex Series option, starting at $150. Subscriptions and single tickets are available through the ProMusica office (614-464-0066 ext. 101; www.promusicacolumbus.org) or through Ticketmaster.