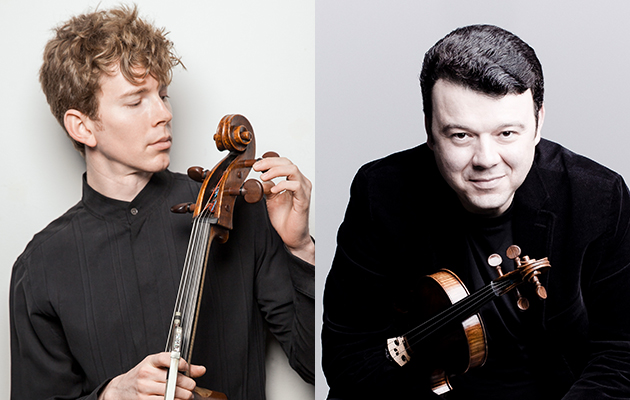 (Columbus) – Acclaimed cellist and composer, Joshua Roman – a longtime friend to ProMusica – comes to Columbus in April for the long awaited world premiere of his double concerto,  Confluence. This new work is ProMusica’s 68th commission to date, and the second piece the orchestra has commissioned from Roman, the first being his Cello Concerto co-commissioned with the Illinois Philharmonic Orchestra in 2016. In addition, Creative Partner and Principal Guest Artist violinist Vadim Gluzman, will join the orchestra — with Music Director David Danzmayr conducting – to finally present this work that had been postponed in 2020 due to the pandemic.

The Classically Modern concerts will be presented on Saturday, April 2 at 5:30 p.m. and Sunday, April 3 at 7 p.m. at the Southern Theatre.

“Finally, David, Vadim and Joshua are reunited to present a program and world premiere that was canceled due to the pandemic in April 2020” said ProMusica CEO Janet Chen. “After two-plus years, we are finally able to present this work, ProMusica’s 68th commission. It will be a memorable and emotional evening with our guest artists and musicans to bring this new composition to life, something we have been looking forward to after such a long time.”

Joshua Roman is a cellist, accomplished composer and curator whose performances embrace musical styles from Bach to Radiohead. Before setting off on his unique path as a soloist, Roman was the Seattle Symphony’s principal cellist – a job he began at just 22 years of age and left only two years later. He has since become renowned for his genre-bending repertoire and wide-ranging collaborations. Roman was named a TED Senior Fellow in 2015. His live performance of the complete Six Suites for Solo Cello by J.S. Bach on TED’s Facebook Page garnered nearly one million live viewers, with millions more for his Main Stage TED Talks/Performances, including an improvisational performance with Tony-winner/MacArthur Genius Grant recipient Bill T. Jones and East African vocalist Somi.

Violinist Vadim Gluzman is in his ninth season as Creative Partner and Principal Guest Artist with ProMusica. His wide repertoire embraces new music and his performances are heard around the world through live broadcasts and a striking catalogue of award-winning recordings exclusively for the BIS label. He is universally recognized among today’s top performing artists and appears regularly with major orchestras all over the world including the Berlin Philharmonic, Boston Symphony, Cleveland Orchestra, Chicago Symphony, Philadelphia Orchestra, San Francisco Symphony, Israel Philharmonic, London Philharmonic, London Symphony, and Leipzig Gewandhaus Orchestra. He performs on the legendary 1690 ‘ex—Leopold Auer’ Stradivari on extended loan to him through the generosity of the Stradivari Society of Chicago.

Tickets for the Classically Modern concerts range from $16 to $58 and are be available through the ProMusica office (online at www.promusicacolumbus.org, and by phone at 614.464.0066 ext. 101) or via Ticketmaster.

Only single tickets will be sold for the remainder of ProMusica’s 2021-22 concerts to ensure flexibility and safety for all audiences. A section for social distanced seating will also be available upon request, through the ProMusica office. CAPA requires all patrons, staff, and volunteers to wear masks at all times while inside the Southern Theatre, in addition to showing proof of vaccination upon entry.