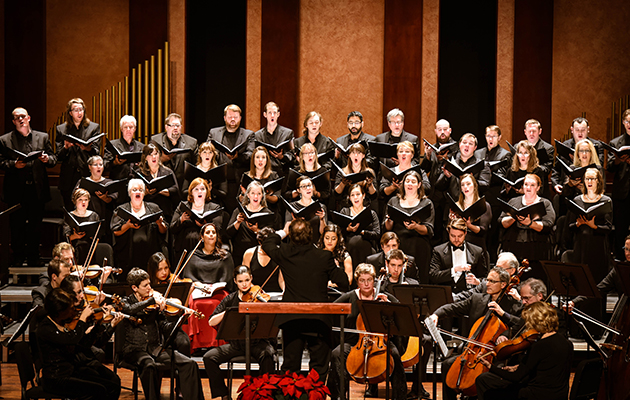 (Columbus) – ProMusica Chamber Orchestra, four premiere soloists, and LancasterChorale join forces under the baton of Music Director David Danzmayr, to perform one of the world’s most well-known and beloved oratorios, Handel’s Messiah.

Composed in 1741, G.F. Handel’s Messiah has since become some of the most frequently performed music in the classical repertoire. ProMusica will present this beloved composition on Saturday, Nov. 12 at 7 p.m. and Sunday, Nov. 13 at 7 p.m. at the Southern Theatre, located downtown at 21 E. Main Street.

After many years of performing the piece as a sing along, ProMusica is thrilled to perform the full work for audiences to enjoy. Four phenomenal vocalists and LancasterChorale will join the orchestra to elevate the experience:

Yulia Van Doren, soprano: A dedicated interpreter of repertoire off the beaten path, Van Doren has thoughtfully cultivated a unique career as one of the foremost concert singers of her generation. Particularly recognized for her work in Baroque repertoire, she has been presented as a guest artist by a majority of the premiere North American orchestras and festivals.

Julie Miller, mezzo-soprano: A return guest, Miller’s recent performance as Ariodante with the Lyric Opera of Chicago was hailed as “an extraordinarily composed and possibly career-changing performance” (Chicago Sun Times) and her singing was described as “deeply musical” (Chicago Tribune).

Kevin Deas, bass-baritone: Deas has gained international renown as one of America’s leading bass-baritones. He is acclaimed for his signature portrayal of the title role in Gershwin’s Porgy and Bess, having performed it with the New York Philharmonic and ensembles across the country. Deas returns to ProMusica after singing in the orchestra’s joint production with Opera Columbus, The Flood, in 2018.

“From the opening overture to the famous Hallelujah chorus—there is no more powerful piece of music that evokes the glorious and sublime,” said Janet Chen, CEO of ProMusica. “Together with our four vocalists and  LancasterChorale friends, as we begin the season of Thanksgiving and holidays, we look forward to bringing the full majesty of this work to our audiences.”

TICKET INFORMATION
Tickets for Handel’s Messiah are now on sale, ranging from $18 to $64, available through the ProMusica Box Office or via Ticketmaster. Season subscriptions are still available—including the “Create Your Own” and “Try Three” packages—at promusicacolumbus.org or by phone at 614.464.0066 ext. 101. ProMusica does not currently have any COVID restrictions or protocols in place, subject to change according to CDC guidelines.