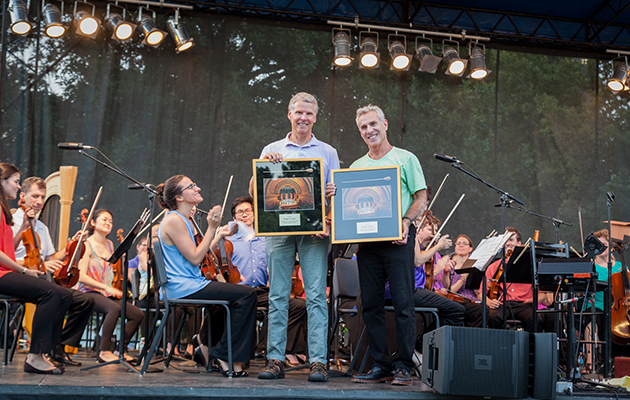 Business Leaders recognized for their dedication to ProMusica and the arts

(Columbus, OH) – At its Summer Music Series concert at The Topiary Park on Aug. 11, ProMusica Chamber Orchestra surprised George Barrett, CEO of Cardinal Health, and Douglas Kridler, President and CEO of The Columbus Foundation by honoring both community leaders with the orchestra’s 2016 Marjorie Lazarus Golden Baton Award. This award, given to an individual, community organization or corporate partner for their compelling dedication to ProMusica and the arts, recognizes George Barrett and Douglas Kridler’s work and vision to create The Columbus Performing Arts Prize, in which ProMusica has been a recipient.

“The Marjorie Lazarus Golden Baton Award celebrates those in our community whose passion for ProMusica fosters opportunities that are unique to our mission, and enriches the arts in our lives in Central Ohio,” said Janet Chen, executive director of ProMusica Chamber Orchestra. “Their creation of The Columbus Performing Arts Prize, to celebrate the exceptional leaders in the performing arts, is one-of-its-kind and we are grateful for their commitment to our Music Director, David Danzmayr and his artistic vision.”

“I am so pleased that Doug and George were chosen as this year’s award winners, it is because of their belief in ProMusica that we can put forth innovating projects like a new recording, and our upcoming series, ‘Naked Classics’,” said David Danzmayr, music director of ProMusica Chamber Orchestra. “The Marjorie Lazarus Golden Baton Award is only a small token of our thanks for their support and leadership, and we celebrate their dedication to elevating our art form in Central Ohio.”