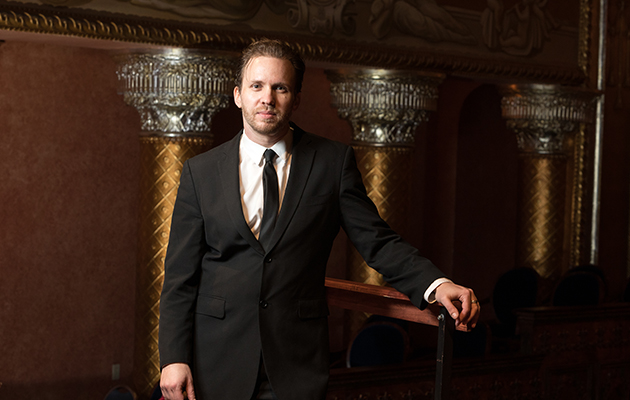 (Columbus, OH) – ProMusica Chamber Orchestra has extended Music Director David Danzmayr’s contract through the 2025-26 season. Danzmayr was appointed Music Director in 2013 and this contract marks Danzmayr’s third extension with the orchestra. Along with CEO Janet Chen and Creative Partner and Principal Guest Artist Vadim Gluzman – Danzmayr has raised the national profile of the orchestra through innovative programming, relationships with internationally renowned guest artists, and creative thinking during the pandemic.

“David is not only beloved by our patrons and community, he is also beloved by artists and audiences globally as one of the most dynamic conductors of this generation,” said ProMusica Board President Bill Faust. “I continue to be inspired by his artistry and talent and we are pleased that our orchestra will continue to thrive under his direction.”

The extension comes just after the Oregon Symphony’s announcement naming David as its new Music Director, starting in the 2021-22 season. He follows Carlos Kalmar, who was Music Director for nearly 20 years. Danzmayr has held other Music Directorship positions throughout his ProMusica tenure, including with the Illinois Philharmonic, the Zagreb Philharmonic, and the Breckenridge Music Festival.

“ProMusica is both thrilled to extend our contract with David, and proud of David’s new appointment with Oregon,” said ProMusica CEO Janet Chen. “It is a testament to ProMusica, and we look forward to David further lifting ProMusica on the national platform and continuing to play a key part in ProMusica’s place in the Columbus community.”

Under Danzmayr’s leadership, ProMusica was the first major performing arts organization in Columbus to perform in front of live audiences, as the COVID-19 pandemic continues to upend performance schedules for orchestras around the country. ProMusica has performed safely for live audiences this summer and through November, with concerts taking place outdoors and in a non-traditional venue that allowed flexibility to implement safety measures that were not available at traditional performance venues.

“I am extremely happy to extend my tenure with ProMusica, and to continue growing and developing the orchestra,” Danzmayr said. “ProMusica is a very special organization and we have such dedicated and committed musicians. I am proud of the work we have done together and look forward to continuing to share our music with our audiences and many more in the community.”

Bringing worldwide talent to Columbus since 1978, ProMusica offers an adventurous musical experience through intimate performances on the stages of the Southern Theatre and the Worthington United Methodist Church. The orchestra, comprised of 37 musicians, showcases homegrown talents, rising stars, and guest artists of international acclaim. Beyond the concert hall, the orchestra is equally at home throughout the community, serving thousands of individuals through key education and outreach programs. Known for its dual traditions of artistic integrity and fiscal responsibility, ProMusica is now in its 42nd season.

ProMusica’s 2020-2021 season is supported by the Greater Columbus Arts Council, The Columbus Foundation, the Ohio Arts Council, Nationwide, The Reinberger Foundation and the ProMusica Sustaining Board. Media support is provided by WOSU Classical 101 FM.