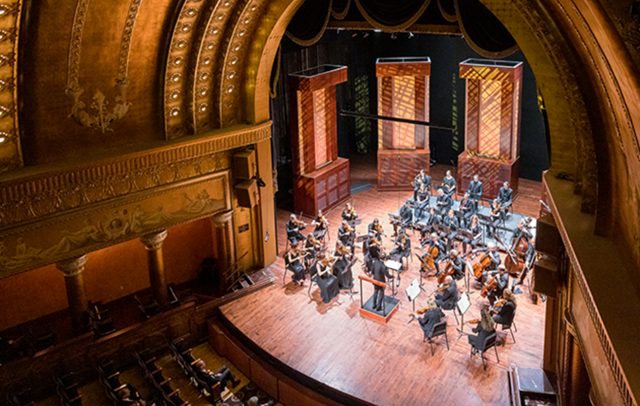 Featuring revered classics, composers of today, and the return of NAKED CLASSICS

(Columbus, OH) – ProMusica Chamber Orchestra today announced the schedule of subscription concerts, as well as the return of NAKED CLASSICS, at the Southern Theatre for the upcoming 2022-23 season. The season’s programming will pay tribute to the classical music giants – with works by Beethoven, Mozart, and Mendelssohn – and will highlight a wide range of guest artists and today’s living composers.

“We are thrilled to continue our momentum into our 44th season, filled with traditional favorites and featuring a diverse array of guest artists and contemporary works by today’s leading composers,” said ProMusica CEO Janet Chen. “In addition, after three years, we are excited to bring back a staple of ProMusica’s offerings, our beloved NAKED CLASSICS with host Paul Rissmann. This season marks our commitment to strengthening our national and international reputation and reconnecting with and inviting new and longtime music lovers back into the theatre for our joyful performances.”

OPENING WEEKEND: BEETHOVEN 5, Oct. 8 and 9, 2022, Southern Theatre: The season will open with one of the world’s most celebrated symphonic works, Beethoven’s Fifth. The concerts also welcome cellist Kian Soltani for his ProMusica debut. Hailed by The Times as a “remarkable cellist” and described by Gramophone as “sheer perfection,” Soltani’s recent soloist appearances include the Vienna Philharmonic, London Philharmonic, Berlin Staatskapelle, and the Boston Symphony and Chicago Symphony Orchestras. David Danzmayr conducts as Soltani, and the orchestra perform Haydn and the Ohio premiere of Reza Vali’s “The Girl from Shiraz” from Persian Folk Songs for cello and orchestra. The program also includes Pulitzer Prize and Grammy-Award winning composer Aaron Jay Kernis’ Musica Celestis.

CLASSICAL & KLEZMER, March 4 and 5, 2023, Southern Theatre: Concertmaster of the esteemed Berlin Philharmonic and former Concertmaster of the Pittsburgh Symphony, Noah Bendix-Balgley performs his original composition Fidl Fantazye: A Klezmer Concerto as part of ProMusica’s “Composer/Performer” project. The program also includes Mozart’s first and last symphonies – No. 1 and No. 41, “Jupiter” – to round out the program.

“Klezmer” is a musical tradition of the Ashkenazi Jews of Central and Eastern Europe, with elements of traditional dance tunes, ritual melodies, and virtuosic improvisation.

BRAHMS & SHAW, May 13 and 14, 2023, Southern Theatre: The remarkable voice of Caroline Shaw, as both a vocalist and a composer, is featured in ProMusica’s season finale. The youngest composer to win a Pulitzer Prize, Shaw is a musician “who moves among roles, genres, and mediums, trying to imagine a world of sound that has never been heard before but has always existed.” The program will feature three of Shaw’s original compositions: Blueprint for String Quartet, Is A Rose, and Entr’acte for String Orchestra. The season will conclude with a performance of Brahms’ Symphony No. 1 conducted by David Danzmayr.

NAKED CLASSICS: Mozart – Journey of a Genius, March 3, 2023: Host, presenter and educator Paul Rissmann returns to central Ohio to explore the musical genius of Wolfgang Amadeus Mozart through his first and last symphonies, No. 1 and No. 41 “Jupiter”. ProMusica’s NAKED CLASSICS series offers the opportunity to experience the deconstruction of live masterworks through graphics, excerpts, and interviews to reveal fascinating aspects of the piece and its composer, with the full work being performed in the second half of the concert in its entirety.

Additional events and performances will be announced at a later date, including the return of the annual fundraiser, the ProMusica Soirée.

SEASON TICKET SUBSCRIPTION (AND SINGLE TICKET) INFORMATION
Season subscriptions will go on sale on Sunday, May 22, 2022, and will be available online at promusicacolumbus.org or by calling ProMusica at 614.464.0066 ext. 101. Subscriptions packages for the 2022-2023 season will range from $99 to $324. Single tickets to any regular season concert will range from $18 to $64 and will go on sale in September and will be available through the ProMusica office or via Ticketmaster.