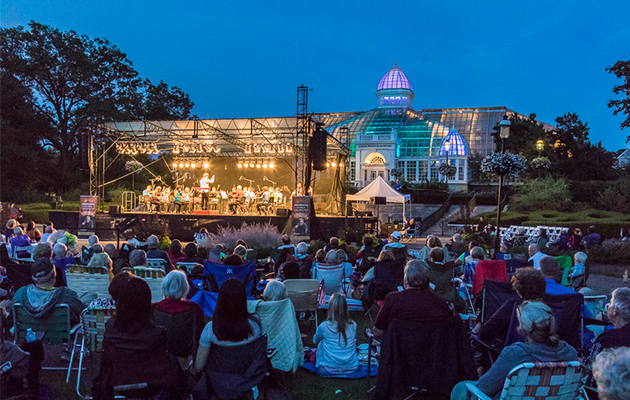 (Columbus, OH) – The world-class talent of ProMusica’s musicians will be on display during its annual Summer Music Series at Franklin Park Conservatory & Botanical Gardens on Aug. 9, 11 and 12. The three-concert festival will be led by Music Director David Danzmayr and will begin at 8 p.m. Admission is free. Franklin Park Conservatory & Botanical Gardens is located at 1777 E. Broad Street, Columbus 43203.

“More than 5,000 people joined us last year for the Summer Music Series. It’s a great, family-friendly summer outing, against the lighted backdrop of the beautiful Franklin Park Conservatory. For many Central Ohioans, this series is a great way to hear ProMusica for the first time and it’s definitely a memorable experience,” said ProMusica Executive Director Janet Chen. “And in this venue, our remarkable musicians get a chance to really shine and display their incredible talents.”

Each night will feature a different unique program highlighting various members of the orchestra:

Arrive early enough to stroll the grounds and take in the summer beauty of the grounds of Franklin Park. As always with the ProMusica Summer Series, the dress code is seasonably informal – come as you are. Fun, educational music and garden-themed activities for children will be available beginning at 7 p.m.

Guests can pack a picnic, or there will be food and wine vendors available for dining. The venue will also feature reserved table seating with limited menu available for pre-order.

The 2018 Summer Music Series is presented in partnership with Franklin Park Conservatory & Botanical Gardens, with support from Crane Family Foundation, The Fox Foundation and the Cardinal Health Foundation.