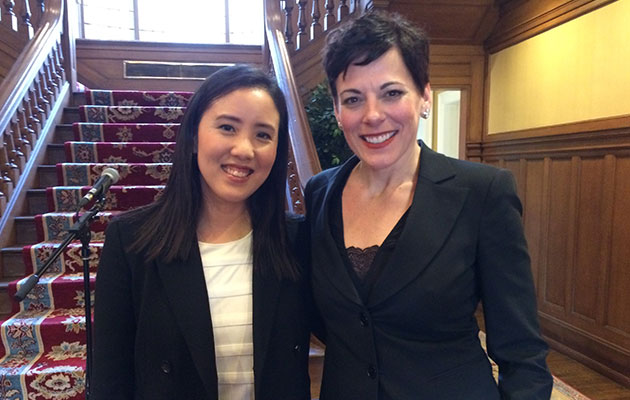 Production set in Columbus neighborhood of Franklinton; major funding has already been received from Arts Innovation Fund of The Columbus Foundation and OPERA America

(Columbus, OH) – Opera Columbus and ProMusica Chamber Orchestra are partnering to co-produce and co-commission a new chamber opera titled The Flood – a story of loss, human tragedy and redemption set in Columbus. The work represents the first collaboration between the two arts organizations, as well as ProMusica’s 67th commissioned work and Opera Columbus’ first commission of a new mainstage opera in nearly 20 years.

The opera is about the Ohio Flood of 1913 and its lasting effects — the legacy of trauma and how it is passed down through generations. All the stories take place in Columbus, a city whose low-lying, riverbank community Franklinton, the downtown neighborhood directly to the west of the Scioto River, was destroyed in the flood. The Flood will show the intense human impact of the disaster and its lingering effect through multiple generations of a family.

An initial workshop for The Flood took place at OPERA America’s National Opera Center in New York in November 2017, with an additional workshop to follow in May 2018 in Columbus with hopes of the third workshop in December 2018 at the Sundance Institute. The chamber opera is scheduled for its World Premiere performances on February 8 through 10, 2019 at the Southern Theatre.

“There is so much to celebrate in this ambitious and exciting undertaking that is “The Flood”:  Great local arts organizations with tremendous leaders and vision, collaborating with some of America’s most respected creative talents, bringing to life for Central Ohio a brand new work from which we can all learn and be inspired,” said Douglas F. Kridler, Columbus Foundation President and CEO. “Columbus audiences will have the chance to experience a once in a lifetime world premier about our community that will be anticipated and celebrated worldwide.  Cheers to Opera Columbus and ProMusica for their leadership and vision for making this possible.”

“Our primary goal for The Flood is to create an outstanding operatic work that explores the history of Columbus, engaging and reflecting the community Opera Columbus and ProMusica are proud to call home,” said Opera Columbus General and Artistic Director Peggy Kriha Dye.

“While ProMusica has had a solid history of commissioning new works, this co-commission with Opera Columbus will be the first time we’ve created a chamber opera. This offers us an opportunity to contribute a significant new work to the repertoire,” said ProMusica Executive Director Janet Chen. “This work will also support our efforts to bring more national attention to ProMusica and Opera Columbus, as innovators within our genres.”

Named as one of Strings Magazine’s “25 Contemporary Composers to Watch”, composer Korine Fujiwara is a founding member of the Columbus-based Carpe Diem String Quartet, as well as a sought-after chamber musician and gifted composer and arranger. She is a founding member of the Marble Cliff Chamber Players, based in Columbus and Delaware, Ohio, and performs annually with the Snake River Chamber Players in Keystone, Colorado. She has received multiple commissions including works for chamber ensembles, chorus, concerti, and music for modern dance, and her works have been heard throughout the United States, Europe and in the Far East.

Director and librettist Stephen Wadsworth is the James S. Marcus Faculty Fellow and the director of the Artist Diploma in Opera Studies program at Juilliard, and is head of dramatic studies in the Metropolitan Opera’s Lindemann Young Artist Development Program. Mr. Wadsworth has directed opera at the Met, La Scala, Covent Garden, Vienna State Opera, Netherlands Opera, Edinburgh Festival, San Francisco Opera, and many others, and plays on and off Broadway, in London’s West End, and in U.S. regional theater. He was named Chevalier de l’Ordre des Arts et des Lettres by the French government, and is Creative Advisor for the Sundance Institute Theatre Program.

Conductor Steven Osgood recently completed his second season as General and Artistic Director of the Chautauqua Opera Company in New York, one of the oldest continuously active summer opera companies in the U.S, founded in 1929. From 2001 to 2008, Osgood was Artistic Director of American Opera Projects, where he conducted numerous developmental workshops.  He has been an Assistant Conductor with the Metropolitan Opera since 2006. His conducting appearances include New York City Opera, Edmonton Opera, San Francisco Opera’s Merola Opera Program and Western Opera Theater, Opera Memphis, Fort Worth Opera Festival, Atlanta Opera, Opera Saratoga, the Gulbenkian Festival, and the Wintergreen Festival.

Under the vision of General and Artistic Director Peggy Kriha Dye, Opera Columbus is redefining the concept of regional opera with world-class, original productions that celebrate extraordinary young talent and artistic collaboration, engaging a new, diverse audience for this most magnificent of art forms. Opera Columbus is currently engaged in a collaboration with the Artist Diploma for Opera Studies (ADOS) program at The Juilliard School which brings exceptional Juilliard ADOS artists to perform in Opera Columbus’ mainstage productions. For more information, visit www.OperaColumbus.org.

Under the artistic leadership of Music Director David Danzmayr and Creative Partner, renowned violinist Vadim Gluzman, ProMusica Chamber Orchestra is dedicated to raising the national profile of Columbus through world-class performances and creative approaches to community outreach and education. Founded in 1978, today ProMusica is recognized for its commitment to performing new and contemporary repertoire, having commissioned 65 new works and has presented more than 110 premieres and for bringing worldwide talent to Columbus. Beyond the concert hall, the orchestra is equally at home throughout the community, serving thousands of individuals through key education and outreach programs. In June 2017, ProMusica made its Chicago debut to perform for a sold-out crowd at the North Shore Chamber Music Festival and to critical acclaim. For more information, visit www.promusicacolumbus.org.