ProMusica to perform Mozart’s “Requiem” on Nov. 4-5 at the Southern Theatre 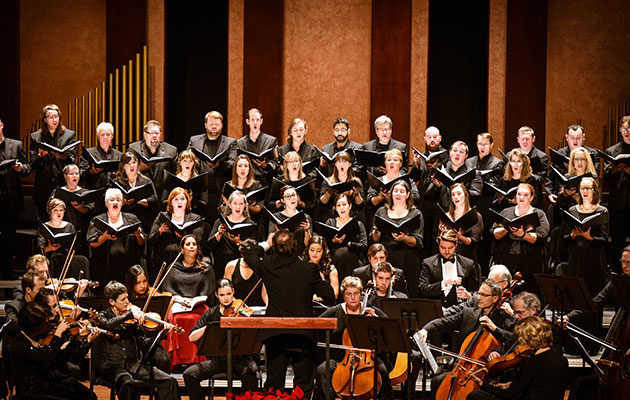 The evening will begin with Kathrin Danzmayr as featured soloist performing contemporary composer Osvaldo Golijov’s Three Songs For Soprano and String Orchestra — “Night of the Flying Horses (Lullaby, Doina and Gallop),” “Lúa Descolorida” and “How Slow the Wind.”

Kathrin will be joined by mezzo-soprano Abigail Nims, tenor Lawrence Wiliford, baritone Aaron Wardell, and LancasterChorale for one of the most moving works in the choral repertoire, Mozart’s Requiem’ in D minor, K. 626 — a masterwork left unfinished upon his death in 1791, with a variety of stories and speculation surrounding the provenance of its original completion. LancasterChorale has a long association with ProMusica, having performed with the orchestra several times over the years including performances of Mozart’s Mass, Handel’s Messiah, and Saint-Saëns’ Christmas Oratorio last season. Vocalists Abigail Nims and Aaron Wardell have also previously appeared with ProMusica. The wife of music director David Danzmayr, Kathrin Danzmayr will be making her third appearance with ProMusica.

“The history of Mozart’s ‘Requiem’ is fascinating, with several different composers claiming a piece of it,” said Executive Director Janet Chen. “That said, it is a monumental composition, both heartbreaking and intimate, and full of fire and brimstone. We are looking forward to presenting it for the first time in ProMusica’s 39-year-history.”

ProMusica also invites the attendees to stay for the Coda: Post-Concert Conversation – an opportunity to meet David Danzmayr and the soloists, and learn more about the evening’s program with a discussion led by WOSU Classical 101 host Boyce Lancaster, with treats provided by Cornucopia Comestibles.

Additional information on the soloists is available at ProMusica’s web site, https://promusicacolumbus.org//event/mozarts-requiem/.

SEASON TICKET SUBSCRIPTION (AND SINGLE TICKET) INFORMATION
Subscriptions packages, ranging from $62 to $270, are available for the 2017-18 concert season, including a Flex Series option and a Worthington Series. Single tickets to any regular season concert cost $12 to $50, are on sale now. Subscriptions and single tickets will be available through the ProMusica office (614-464-0066; www.promusicacolumbus.org) or through Ticketmaster.