Vadim Gluzman Returns with ProMusica for Concerts on Nov. 6 and 7 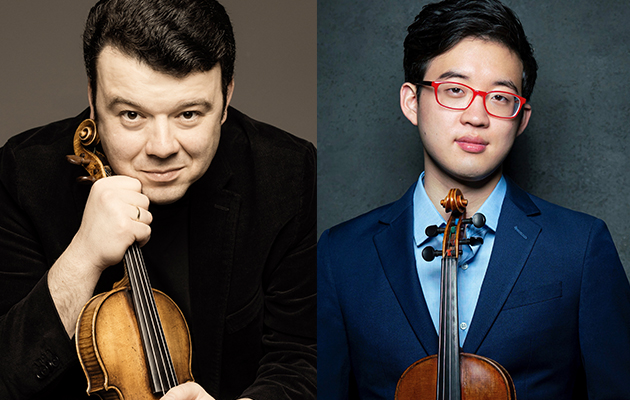 (Columbus) – Creative Partner and renowned violinist Vadim Gluzman returns to ProMusica Chamber Orchestra to play and lead a program of virtuosic works by Beethoven and 20th century Russian composer Alfred Schnittke. Gluzman and ProMusica also welcome to the Southern Theatre stage, rising star violinist Julian Rhee – featured as part of a partnership with the North Shore Chamber Music Festival’s “Stars of Tomorrow!” program, which awards scholarships from the Arkady Fomin Scholarship Fund to talented young artists from around the world.

On the first half of the program, Gluzman and six other ProMusica principal musicians, will showcase one of Beethoven’s most popular chamber works, the lyrical and elegant Septet, with its mix of wind and string sonorities. The second half of the program consists of Schnittke’s Concerto Grosso No.1, which will feature both Rhee and Gluzman as soloists.

“It is always a joy to work with Vadim, and every year when he returns to Columbus it is like making music with a longtime friend,” said ProMusica CEO Janet Chen. “We are so fortunate to have his artistry to perform different types of repertoire that allow the orchestra to get deeply intimate in size, as well as works that really aren’t performed that frequently, such as the Schnittke. I have no doubt this concert will take you on an emotional journey from the sentimental to the energetic!”

Violinist Vadim Gluzman is in his ninth season as Creative Partner and Principal Guest Artist with ProMusica. His wide repertoire embraces new music and his performances are heard around the world through live broadcasts and a striking catalogue of award-winning recordings exclusively for the BIS label. He is universally recognized among today’s top performing artists and appears regularly with major orchestras all over the world including the Berlin Philharmonic, Boston Symphony, Cleveland Orchestra, Chicago Symphony, Philadelphia Orchestra, San Francisco Symphony, Israel Philharmonic, London Philharmonic, London Symphony, and Leipzig Gewandhaus Orchestra. He performs on the legendary 1690 ‘ex—Leopold Auer’ Stradivari on extended loan to him through the generosity of the Stradivari Society of Chicago.

Tickets for the November concerts range from $16 to $58 and are be available through the ProMusica office (online at promusicacolumbus.org, and by phone at 614.464.0066 ext. 111) or via Ticketmaster.

Only single tickets will be sold for ProMusica’s fall concerts to ensure flexibility and safety for all audiences. A section for social distanced seating will also be available upon request, through the ProMusica office, and Southern Theatre capacity will be limited. CAPA requires all patrons, staff, and volunteers to wear masks at all times while inside the Southern Theatre, in addition to showing proof of vaccination.