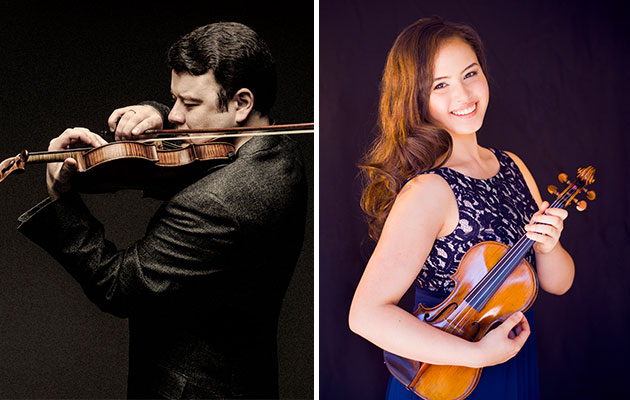 (Columbus, OH) –  ProMusica’s Creative Partner and Principal Guest Artist violinist Vadim Gluzman returns to Columbus to both play and lead the orchestra for a program that features significant works in the classical string orchestra repertoire. ProMusica and Gluzman will also be joined by rising star violinist Alina Kobialka, who made her solo debut at age 14 with the San Francisco Symphony at its 100th Anniversary Reunion Concert, as part of a partnership with the North Shore Chamber Music Festival.

To start the concert weekend, on Friday April 5, host and presenter Paul Rissmann will lead another installment of his NAKED CLASSICS series, in which he and Gluzman, along with the orchestra, will deconstruct and examine Shostakovich’s Chamber Symphony. This deeply moving and emotional piece was adapted from being originally composed as a string quartet, and through NAKED CLASSICS, audiences will have the opportunity to learn (and hear) the transformation of how it has become a major work of the string orchestra repertoire today.

Bach & the Russians, the concert program thoughtfully developed by Gluzman in his creative partner role, will feature him in both the soloist role and as leader from the first violin stand throughout the evening. The concert starts with Gluzman as soloist for Johann Sebastian Bach’s Violin Concerto No. 2 in E major, BWV 1042. The orchestra will next perform the notable Russian composer, Dmitri Shostakovich’s Chamber Symphony. Beginning the second half of the program, Gluzman will share the spotlight with guest violinist Alina Kobialka, for Bach’s Concerto For Two Violins in D minor, BWV 1043 The program concludes with, Pyotr Ilyich Tchaikovsky’s Serenade For Strings

Alina Kobialka who at age 21, has captured the imagination of the classical music world as a result of her beautiful tone, effortless precision, and musical maturity beyond her years.  She has toured and performed with a number of major ensembles nationally and internationally. The San Francisco Classical Voice described her as a “jaw-droppingly assured” soloist, who “made present and future converge.”  At the age of 13, Kobialka won the San Francisco Symphony Youth Orchestra’s Concerto Competition and performed the Tchaikovsky Violin Concerto with the orchestra. The following summer, she toured with them throughout Europe, performing in some of the continent’s most prestigious halls and festivals, including the Berlin Philharmonie and Rheingau Musik Festival.

“We always look forward to having  Vadim here with us taking the helm of the orchestra,” said ProMusica’s Executive Director Janet Chen. ”Combined with the opportunity to welcome the exceptionally talented Alina Kobialka, by partnering with our friends at the North Shore Chamber Music Festival, this concert is sure to be a dynamicevening of music that will highlight the depth and range of the orchestra.”

Kobialka’s appearance is made possible by Chuck and Patt DeRousie, and in partnership with the North Shore Chamber Music Festival’s “Stars of Tomorrow!” program, which Gluzman is actively involved.

The NAKED CLASSICS Series is supported by the Lee Shackelford Family Fund. Alina Kobialka’s appearance, for Bach & the Russians, is made possible by Chuck and Patt DeRousie, and in partnership with the North Shore Chamber Music Festival’s “Stars of Tomorrow!” program.

TICKET INFORMATION
Tickets for NAKED CLASSICS: Shostakovich Chamber Symphony are $25 each for general admission. Tickets for Bach & the Russians range from $15 to $55. Tickets and more information are available through the ProMusica office (614) 464-0066 ext. 101; www.promusicacolumbus.org) or through Ticketmaster.

ABOUT NAKED CLASSICS
NAKED CLASSICS explores classical music in a fresh and approachable format. ProMusica, along with host & presenter Paul Rissmann, deconstructs a masterwork—using graphics, excerpts, and interviews to reveal fascinating aspects of the piece, and the composer’s life and times. In the second half of the concert, the piece is performed in its entirety, providing a new perspective of the work. NAKED CLASSICS is for anyone—from the newcomer who wants to dip their toes into the world of classical music to the seasoned aficionado seeking a deeper appreciation.