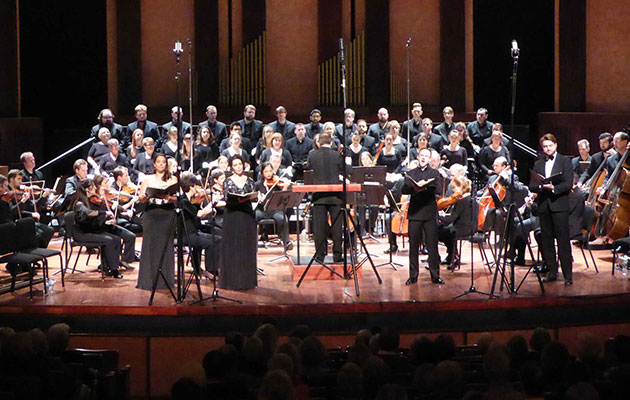 (Columbus, OH) – Music Director David Danzmayr and ProMusica Chamber Orchestra will conclude its 40th anniversary season with Beethoven’s Ninth, on Saturday, May 11 at 5:30 p.m. and Sunday, May 12 at 7 p.m. at the Southern Theatre. The program pays tribute to the Viennese masters—beginning with Allegri’s choral work, transcribed by Mozart, Miserere mei, Deus, and continuing with eloquently orchestrated songs by Schubert. The concert finishes with Beethoven’s monumental Symphony No. 9, leading listeners through an emotional journey from grief into fury, before emerging into pure joy and celebration.

“The vocalists who will be joining us are all dear friends of ProMusica, having performed with us in the past—most recently for Mozart’s Requiem last season.We are thrilled to be joining forces again,” said Executive Director Janet Chen.

In addition to the featured soloists and choir, a number of supporting musicians will be added to ProMusica’s core of 37 musicians, to fill out the instrumentation of the symphony as Beethoven had written it.

“This will be the first time in ProMusica’s history that we will perform Beethoven’s Symphony No. 9 and this large production will sure to be a rousing musical celebration to end the year,” said Chen.

The first half of the concert will feature LancasterChorale with one of the great classical a cappella classics of all time, Gregorio Allegri’s Miserere mei, Deus, as transcribed by Wolfgang Amadeus Mozart. A 14-year old Mozart was so moved by hearing this piece, performed in the Sistine Chapel, that he transcribed it by memory. Initially composed in 1638, Mozart’s version of Miserere was published in 1771.

The four guest vocalists will each take the spotlight performing four songs by Franz Schubert: Gretchen at the Spinning Wheel, Night and Dreams, Ganymed and Serenade. Music Director Danzmayr returns to Schubert, one of his favorites, after the orchestra completed a Schubert Symphony Cycle last season.

Finally, ProMusica will be completing its two-year Beethoven Symphony Cycle with the massive Symphony No. 9—regarded by many critics and musicologists as one of Beethoven’s greatest works and one of the supreme achievements in the history of western music.