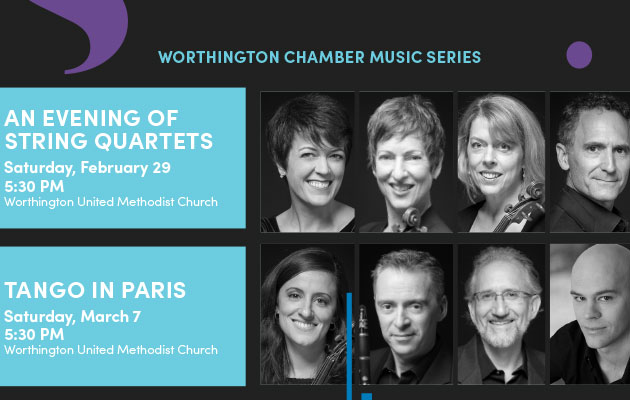 (Columbus, OH) – ProMusica Chamber Orchestra’s own core musicians step into the spotlight to develop programs for a pair of small ensemble chamber music concerts, just a week apart, in February and March at the Worthington United Methodist Church.  The first features ProMusica’s principal string players performing an evening of beloved string quartes. One week later, ProMusica string and principal clarinet players will be joined by a guest pianist for a program of chamber works ranging from the romantic French to the flavors of tango.

“ProMusica is made up of a collective of world-class musicians who have remarkable careers outside of their roles in the orchestra, and who come from all over the country to play here with us,” said Chief Executive Officer Janet Chen. “These smaller, more intimate chamber music concerts in Worthington, really give our musicians the opportunity to show off their extraordinary individual talents, and are a uniquely different experience from some of our concerts with the full chamber orchestra.”

One week later, in March, the Tango In Paris program will features principal clarinetist Ilya Shterenberg (who also holds the same role with the San Antonio Symphony), violinist Victoria Moreira, cellist Joel Becktell, and guest pianist Ryan Behan. Victoria Moreira specializes in tango, and was featured with her quartet earlier this season performing tango selections as a part of ProMusica’s Sessions series. Dr. Ryan Behan is a frequent collaborator with ProMusica and currently serves on the faculty at The Ohio State University and the Mozarteum International Summer Academy in Salzburg, Austria. The concert will include Darius Milhaud’s Suite for Violin, Clarinet and Piano; Ravel’s Sonata for Violin and Cello; Nino Rota’s Trio for Clarinet, Cello and Piano; Astor Piazzolla’s (arr. Bragato) The Four Seasons of Buenos Aires; and Miguel Del Aguila’s Tango Trio, Op. 71 C.

TICKET INFORMATION
Tickets for both the An Evening of String Quartets concert and the Tango in Paris concert are $37 general admission. Subscriptions, single tickets, and more information are available through the ProMusica office (614-464-0066 ext. 101; www.promusicacolumbus.org).

ProMusica’s 2019-2020 seasonis supported by the Greater Columbus Arts Council, The Columbus Foundation, the Ohio Arts Council, Nationwide, and the ProMusica Sustaining Board. Media support is provided by WOSU Classical 101 FM.