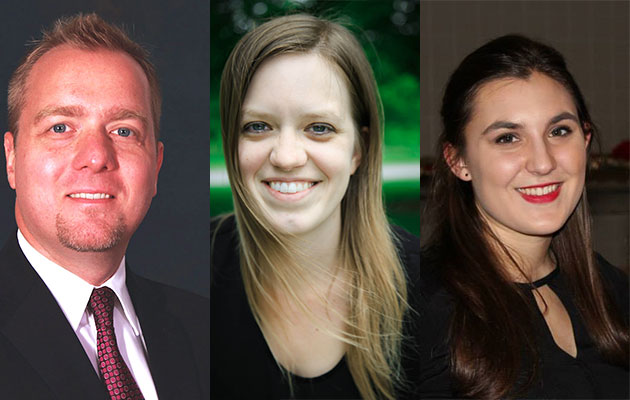 New Director of Advancement and Engagement Matthew Kurk has a professional background in the higher education development field, holding key positions at Ohio Wesleyan University, The Ohio State University-Wexner Medical Center, and the Radcliffe Institute for Advanced Study. Kurk’s education in the arts will serve him well in his new position, with degrees in music from Eastern Kentucky University and Boston University. Matt and his wife, Nicole, live in Worthington.

Bethany Dickens, another Worthington resident, graduated with a B.A. and M.A. degrees in Public History from the University of Central Florida. Prior to joining the ProMusica organization as Executive and Advancement Assistant, Dickens worked in higher education administration at The Ohio State University and University of Central Florida as a grant writer and sponsored program officer. A passionate supporter of the arts in Columbus, she has a rich background in creative writing as well as technical writing and grand management.

“I am thrilled to have Matt, Bethany and Venessa join our administrative team,” said Executive Director Janet Chen. “Not only do they each possess great expertise in their respective fields, but they all have a deep passion for music and the arts which is invaluable to the organization. It is exciting to bring them on board as ProMusica continues on our journey of growth and ambitious aspirations.”

SEASON TICKET SUBSCRIPTION (AND SINGLE TICKET) INFORMATION
Subscriptions packages, ranging from $62 to $270, are available for the 2017-2018 concert season, including a Flex Series option and a Worthington Series. Single tickets to any regular season concert cost $12 to $50, are on sale now. Subscriptions and single tickets are available through the ProMusica office (614-464-0066; www.promusicacolumbus.org) or through Ticketmaster.