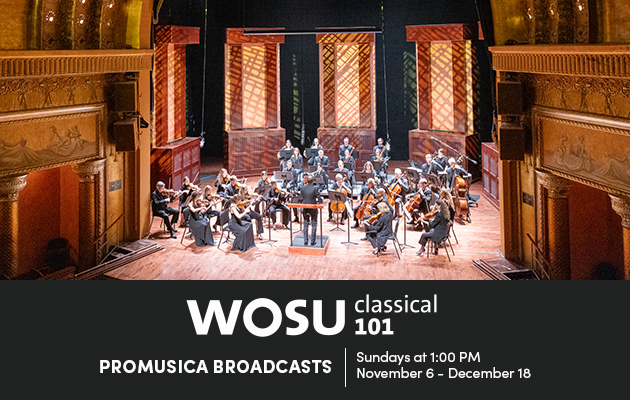 During the months of November and December, tune in weekly to WOSU Classical 101 FM’s ProMusica Chamber Orchestra Broadcast with Boyce Lancaster, Sunday afternoons at 1:00 PM, to hear selected concerts from our 2021-22 season. Mark your calendars to relive the joyful and exciting concert moments on your radio!

NOVEMBER 6, 2022 – The broadcast season opens with Opening Night of ProMusica’s 43rd season with the celebratory return to the Southern Theatre! Composer/performer Xavier Foley performs Bottesini’s Bass Concerto No. 2, and violinist Eunice Kim joins him for Foley’s own composition, For Justice and Peace – a moving work that illustrates the importance of social justice issues to our society today. The program opens with Suite for Lower Strings, a reimagination of beloved Bach melodies by Brazilian-American composer Clarice Assad, and concludes with Beethoven’s wildly energetic and fantastic Seventh Symphony.

NOVEMBER 20, 2022 – Widely known for her distinctive musical voice, pianist Simone Dinnerstein makes her ProMusica debut leading the orchestra from the keyboard for a transformative program of Bach and Philip Glass. Her inventive interpretations of the great Baroque master are highlighted in the first half, and the program closes with Philip Glass’s Piano Concerto No. 3 — written to be paired with Bach, and which Dinnerstein helped co-commission and premiered in 2017.

DECEMBER 4, 2022 – This week’s broadcast features combinations of duo, trio and quartets revealing the virtuosic and musical potential of the string family. ProMusica’s principal string musicians Katherine McLin, Mary Harris, Marc Moskovitz, and John Pellegrino crisscross the European musical continent, from Italy and Austria to England and Russia, in a varied program of unusual music for strings. The broadcast ends with Vaughan Williams’ string orchestra masterpiece, Fantasia on a Theme by Thomas Tallis, performed at St. Mary’s Catholic Church in March of 2022.

DECEMBER 11, 2022 – David, Vadim, and longtime ProMusica friend, cellist/composer Joshua Roman finally reunited to perform a program that had been canceled in 2020, due to the pandemic, and was finally performed last April. Vadim graces the stage for Mendelssohn’s infamous Violin Concerto, and then joins Joshua for the world premiere of his double concerto and ProMusica’s 68th commission. Haydn’s whimsical “Surprise” Symphony and Argentinian composer Osvaldo Golijov’s Last Round round out the broadcast program. The broadcast will end with Katherine McLin’s performance of Astor Piazzolla’s beloved and virtuosic work “Four Seasons,” that was performed at St. Mary’s Catholic Church in March of 2022.