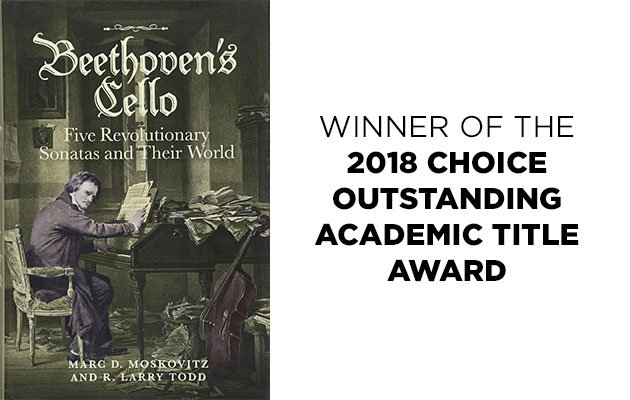 Principal cellist Marc Moskovitz and Larry Todd, pianist and professor at Duke University, co-authored the recently published book, Beethoven’s Cello: Five Revolutionary Sonatas and Their World. Join us as they discuss and perform several of these works that are the cornerstone of today’s cello repertoire on Saturday, April 27 at Worthington United Methodist Church.

When you purchase a ticket to the performance, you will have the opportunity to add on a signed hardcover copy of the Beethoven’s Cello book for just $30, that will be available for pick-up at the concert. (NOTE: If you are purchasing your tickets online, there will be a link to add on the book to your order at the bottom of the ‘Cart’ page, once you’ve added your concert ticket.)

We’d like to congratulate Marc and Larry for their book receiving the 2018 CHOICE Outstanding Academic Title Award!

The CHOICE Awards are a prestigious list that reflects the best in scholarly titles reviewed by Choice and brings with it the extraordinary recognition of the academic library community. Read more information on the prestigious CHOICE awards here: http://www.ala.org/acrl/choice/outstanding

More about Beethoven’s Cello: Five Revolutionary Sonatas and Their World:
Beethoven’s Cello is the ideal companion for cellists, pianists, musicologists and chamber-music devotees desiring a comprehensive understanding of this beloved repertoire. Published in 2017 by Boydell & Brewer.

In 1796 the young Beethoven presented his first two cello sonatas at the court of Frederick William II, an avid cellist and the reigning Prussian monarch. Released in print the next year, these revolutionary sonatas forever altered the cello repertoire by fundamentally redefining the relationship between the cello and the piano and promoting their parity. Beethoven continued to develop the potential of the duo partnership in his three other cello sonatas – the lyrical and heroic Op. 69 and the two experimental sonatas Op. 102, No. 1 and No. 2, transcendent compositions conceived on the threshold of the composer’s late style.

In Beethoven’s Cello, Marc D. Moskovitz and R. Larry Todd examine these seminal cornerstones of the cello repertoire and place them within their historical and cultural context. Also considered in a series of interludes are Beethoven’s three variation sets, his cello-centric ‘Triple’ Concerto, and arrangements for cello and piano of other works. Two other interludes address the cellos owned by Beethoven and the changing nature of his pianos. Featuring a preface by renowned cellist Steven Isserlis and concluding with translated reviews of the composer’s cello music published during his lifetime, Beethoven’s Cello is the ideal companion for cellists, pianists, musicologists and chamber-music devotees desiring a comprehensive understanding of this beloved repertoire.