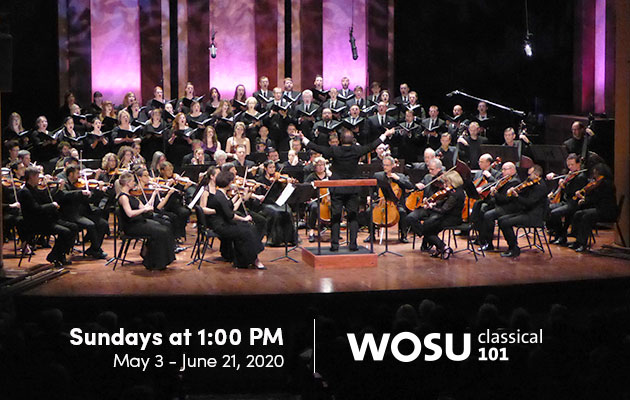 Starting May 3 through June 21, tune in weekly to WOSU Classical 101 FM’s ProMusica Chamber Orchestra Broadcast with Boyce Lancaster, Sunday afternoons at 1:00 PM, to hear our 40th anniversary season concerts. Mark your calendars to relive the joyful and exciting concert moments while staying safe at home!

May 3, 2020 — The broadcast season opens with violinist Vadim Gluzman, pianist Angela Yoffe, and principal cellist of the Cleveland Orchestra Mark Kosower, in a performance of Beethoven’s Triple Concerto. Beethoven’s 2nd Symphony and Three Places in New England by Charles Ives rounds out the program.

May 10, 2020 — Venezuelan-born pianist Gabriela Montero came to Columbus for the second ProMusica concert of the 2018-19 season. She has a particularly inspiring story, as she speaks out about how her native country is being destroyed from within. Not only does she do this in both the spoken and written word, but musically as well. She and ProMusica perform the World Premiere of Babel, as well as Mozart’s 14th Piano Concerto.

May 17, 2020 — Composers have used melodies and themes written by others as inspiration for centuries, but rarely do you reimagine an entire work. Vivaldi’s Four Seasons has served as the launching point for many. Jorge Calandrelli did a Jazz/Classical blend featuring clarinetist Eddie Daniels and Astor Piazzolla wrote a complimentary Four Seasons in Buenos Aires, as examples. (Both have been performed by ProMusica). ProMusica presents Max Richter’s take on the well-known classic with violinist Alexandra Soumm and also features Beethoven’s 4th Symphony on the program.

May 31, 2020 — ProMusica’s Creative Partner and violinist Vadim Gluzman will leads the orchestra with two works by Bach –– his Violin Concerto No. 2 and Concerto for Two Violins –– in addition to Shostakovich’s Chamber Symphony and Tchaikovsky’s Serenade for Strings. Also, 20-year-old violinist Alina Kobialka makes her debut with ProMusica in collaboration with the North Shore Chamber Music Festival’s Stars of Tomorrow! program. At the age of 13, Alina won the San Francisco Symphony Youth Orchestra’s Concerto Competition and performed Tchaikovsky’s Violin Concerto with the orchestra.