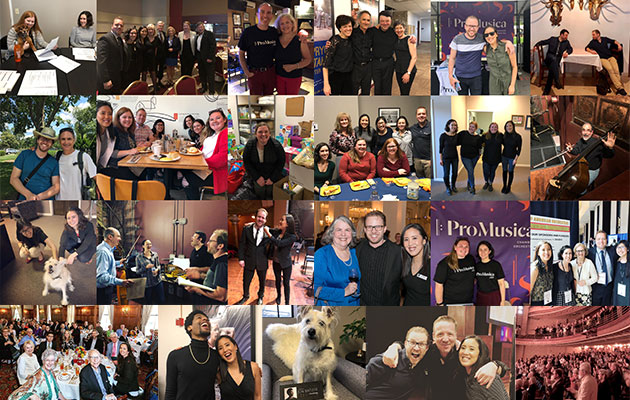 Every year as December comes to a close, we are all hustling and bustling to prep for the holidays — crossing items off our to-do lists, meeting last minute deadlines, and squeezing in gatherings and time for camaraderie with friends and colleagues. Amidst all this energetic chaos, though, I personally seek peace and opportunity to reflect on the past year. Not only to celebrate happy achievements but to honor the challenges endured — and think back on how we overcame those moments as a team. At ProMusica, 2019 had MANY memorable moments, both artistically and through community impact. Our collaboration with Opera Columbus for our 67th commission and world premiere of The Flood — which then received the GCAC Arts Makes Columbus Artistic Excellence Award. Being recognized by The Columbus Foundation as one of 2019’s “5 Nonprofits to Watch”. Our largest audiences of 5,000+ people at our Summer Music Series in partnership with Franklin Park Conservatory & Botanical Gardens. And celebrating The Columbus Metropolitan Library at the grand opening of their Dublin branch by bringing music to our community’s youngest members and their families. All of these moments are because of the commitment from our musicians, Board, administrative team, volunteers, and the artistic leadership in David and Vadim. And all of these moments bring us joy because of the audiences and community we serve. We asked our team to share their favorite moment from 2019. What was your favorite moment? 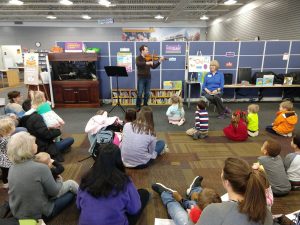 “Our partnership with the Columbus Metropolitan Libraries (CML) is really special. We visit ten different branches to join alongside CML Storytimes and eight other branches to present the Family Concert series. We were even invited to join the Dublin Branch for its Grand Opening, where Eric Kline, a ProMusica violinist, and I were stationed in the children’s area to read books accompanied by music, and to sing classic nursery songs. A little girl with Downs Syndrome became so enraptured by the music that she kept sidling closer and closer to Eric, who was merrily playing away, until she placed her hands on his lap and stared up at his violin as he played. It was the most precious moment and one of my favorite memories from our CML partnership.” – Ann Kriewall, Operations & Community Outreach Coordinator 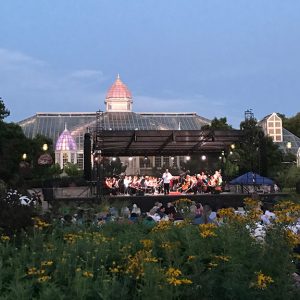 “Summer Music Series concerts are by far my favorite performances of the year. I love the sound of the cicadas in the background of the beautiful music, while everyone around me is enjoying with their friends and family. At the end of the evening it is so dark, so you just leave to the light of the John F. Wolfe Palm House installation, the conversation from new people discovering ProMusica and the reminisce of the music still lingers in the air. This year we had record breaking numbers of people attending and you could feel the energy! I love every moment of the series and as soon as it’s over, I start counting down the days until the next summer. 228 days until the 2020 Summer Music Series! ” – Sarah Gattis, Patron Services & Marketing Associate

“My first season with ProMusica was filled with amazing musicians who became dear friends, endless laughs and good times with our staff, and of course countless euphoric musical moments. My job in operations plants me firmly backstage for all rehearsals and concerts, which means I have quite a different view than the audience. My favorite experience from this year was by far this triumphant moment from Beethoven 9 from our May finale concert. No words needed, just watch the video! (Also, watch out for my Operations partner in crime, Ann Kriewall, who makes an appearance at the end).” – Mariana Szalaj, Orchestra & Operations Manager

“For me, the highlight of 2019 was when I got to be on stage with the orchestra during May’s performance of Beethoven 9. I’ve had the joy of singing with ProMusica a handful of times, but this time, as an employee, I had a better understanding of all the behind the scenes efforts that go into every concert. Seeing my coworkers’ supportive and enthusiastic faces from the stage added an extra special layer to the whole experience.” – Margaret Wells, Executive Assistant & Board Liaison 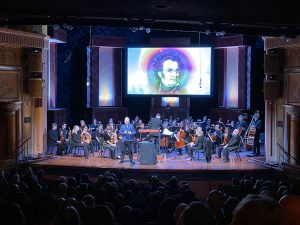 “A highlight for me are our Naked Classics concerts. Paul Rissmann always manages to find the perfect blend of being educational yet entertaining in his presentations. Without fail, I come away with a new insight or fun fact about the piece or composer – even with works that I’m familiar with. The concert exploring the history and theories surrounding Schubert’s Unfinished Symphony was great. Naked Classics is my go-to suggestion when I’m introducing someone new to ProMusica!” – Matt Kurk, Director of Advancement & Engagement

“2019, the year of ProMusica’s 40th birthday(!), has been full of so many special moments. One small memory that sticks out to me from this year is from the Soirée last February with the incomparable Jon Batiste. At the very end of the concert, I was discreetly standing to the side of the theatre snapping a photo of the experience for our social media channels…and all of a sudden Mr. Batiste is parading through the audience playing his melodica, and ended up right beside me, finishing his tune! While much of working in marketing is behind the scenes, once in a while you still find yourself right in the middle of the action and there’s no feeling quite like it.” – Brittany Lockman, Director of Marketing

“Jon Batiste shared a brilliant and soulful performance in February’s Soirée. His keyboard virtuosity and Juilliard training delighted musicians and audience alike as has he deftly wove the genius of Thelonious Monk into the midst of Chopin and Strauss. The finale had the audience smiling, clapping, and singing. He and his melodica led us in a chorus of “You Are My Sunshine” filling the Southern Theatre with harmony and joy. Thank you ProMusica!” – Lee Shackelford, Board President

“Vivaldi’s Concerto for Four Violins performed at the Summer Music Series at Franklin Park Conservatory was magical — in beautiful gardens, with the sun setting, it was a quintessential ProMusica experience, sharing transformative artistry with the whole community!” – Steve Keyes, Board of Trustees 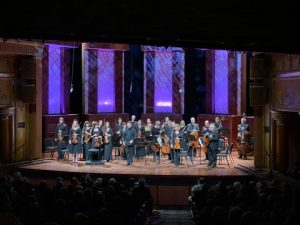 “It is very challenging to be tasked with picking just one moment as a favorite from ProMusica 2019 because my love of the orchestra is reaffirmed every month in hundreds of different ways! But to name the first things that popped into my head: David’s incredibly vivid and compelling description of the beginning of Schubert’s Unfinished (I will never again hear and/or play it without thinking of his narrative), the inspiration of playing Shostakovich and Tchaikovsky with the always amazing Vadim Gluzman, and of course having the opportunity to play my very first Beethoven 9 with an orchestra I love, filled with people who are dear friends of mine, led by my favorite conductor in the world who makes me feel joy every time I work with him, and being so very grateful to be a part of this amazing organization!” – Katie McLin, concertmaster 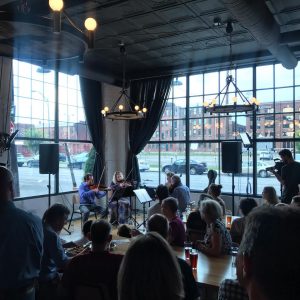 “During our quartet performance at the first ProMusica Sessions at Wolf’s Ridge Brewing, it was so thrilling to hear the audience singing along with our rendition of Bohemian Rhapsody! The passionate responses to our playing was incredible, and it truly showed that our music can touch the soul. It was a ProMusica rock star moment!” – Eric Kline, violin

“We had a great time hosting musicians for a stay in our home over a concert weekend. This was the first time we had done this, and it was great to hear their stories and see first-hand the passion they have for ProMusica.” – Brent Jackson, Board of Trustees

“I’ll share three highlights: the heartbreaking and haunting messages and melodies of the Vadim-led Shostakovich Chamber Symphony; the ebullience and infectiousness of Beethoven’s Ninth; and the December Mozart performance conducted by our Mozart expert and Music Director, David Danzmayr. Oh, and also having all 37 of our musicians sponsored!” – Susan Quintenz, Board of Trustees 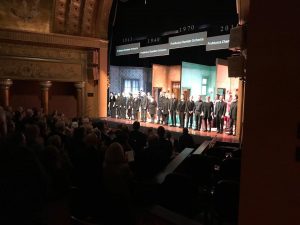 “I think ProMusica’s proudest moment came the day a review of the opera, The Flood, appeared in The Wall Street Journal. The review was positive, technical and written for a sophisticated reader base. It was definitely an announcement to the world that something major-league is afoot in Columbus, Ohio.” – Brett Allen, viola

“Several of my favorite moments: The amazing interaction between David and Paul Rissmann for Naked Classics this fall, especially given the over the top effort all put in to resolve the issues with Paul his Artist Visa. The performance of Jon Batiste and audience participation throughout Soirée, including as Jon marched through the audience and out of the theatre. And the delight of the seniors from Gladden Community House who were able to attend the production of The Flood which meant so much to them personally given the effect it had on their neighborhood.” – Betsy Farrar, Board of Trustees

“There are many great memories from 2019, but my personal favorite moment would have to be performing the Brahms Horn Trio on the March Worthington Series concert. One of my favorite pieces and arguably the best chamber music work ever written for the horn, it was an absolute pleasure and honor to perform it with my wonderful ProMusica colleagues Katie McLin and Andrew Campbell. We even got together in Arizona at their house in February to begin rehearsals while I was there playing a music festival in Scottsdale! It was such a rewarding musical and personal experience, and I was very happy to have the opportunity to be a featured performer on the chamber music series.” – Stephanie Blaha, principal horn

“David’s baton sailing through the air in what seemed like slow motion [during Mozart’s Symphony No. 40]. And anytime David’s face lights up during a concert.” – Marc Moskovitz, principal cello