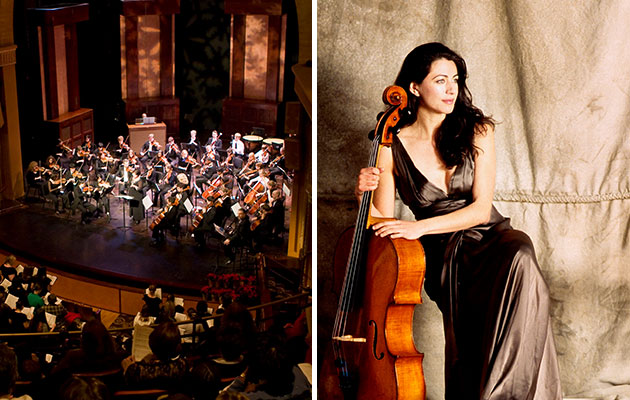 (Columbus, OH) – ProMusica Chamber Orchestra and music director David Danzmayr offer two programs for a music-filled weekend in December. The weekend will start with the annual holiday favorite, the “Messiah Side-by-Side Sing-Along,” and will culminate with two evenings of a program titled “Beethoven’s Eroica” which continues ProMusica’s Beethoven Symphony Cycle and will also feature British cellist Natalie Clein in her first appearance with the orchestra.

The Beethoven’s Eroica concert program will spotlight guest artist Natalie Clein performing one of Shostakovich’s most challenging pieces, his Cello Concerto No. 1, and will begin with Anna Clyne’s beautiful elegy Within Her Arms. Composer Anna Clyne was born in London, but now resides in the United States. Clyne is one of the American immigrant composers whose work ProMusica will highlight this season; each concert will feature a composer who has chosen to make this country their home. The program concludes with Ludwig van Beethoven’s powerful Symphony No. 3 in E-flat Major, ‘Eroica.’ This will be the second time that the orchestra has performed Beethoven’s Eroica under David Danzmayr’s leadership. The concerts will be presented on Saturday, Dec. 9 at 5:30 p.m. at the Worthington United Methodist Church, and Sunday, Dec. 10 at 7 p.m. at the Southern Theatre.

Cellist Natalie Clein burst into the spotlight in 1994 with victories in the BBC Young Musician of the Year contest and the Eurovision Competition for Young Musicians. She was just 16 when she won the former competition and the first British musician to win the latter. Clein has appeared on acclaimed recordings for EMI and Hyperion, and regularly performs as soloist with major orchestras in the U.K., Europe, the Americas, Australia, and New Zealand. Among her more acclaimed recordings is her 2009 Hyperion CD of Zoltán Kodály‘s Sonata for Solo Cello, with pianist Julius Drake. Clein has taught at the London-based Trinity College of Music since 2009.

“We are thrilled to have Natalie Clein joining us this December – she is a very talented artist who is recognized for her lyricism and riveting interpretations. We’re very much looking forward to her debut appearance with ProMusica performing Shostakovich’s first cello concerto,” said ProMusica Executive Director Janet Chen. “In addition, we always look forward to our community tradition of joining forces with singers and musicians from all around Central Ohio for our Messiah Sing-Along.”

Danzmayr will again host and lead the orchestra at this year’s interactive community event, the Messiah Side-by-side Sing-Along. High School students, local choirs, and area music directors will join forces together for a rousing performance of choral excerpts from Handel’s Messiah. Audience participation is highly encouraged, making this one of the most anticipated holiday events each year. The Messiah Sing-Along takes place on Friday, December 8 at 7:30 pm at the Southern Theatre and tickets are $23 each for general admission.

SEASON TICKET SUBSCRIPTION (AND SINGLE TICKET) INFORMATION
Single concert tickets to “Beethoven’s Eroica” range from $12 to $50 and are on sale now. Subscriptions packages, ranging from $62 to $270, are still available for the 2017-18 concert season, including a Flex Series option and a Worthington Series. Subscriptions and single tickets are available through the ProMusica office (614-464-0066; www.promusicacolumbus.org) or through Ticketmaster.