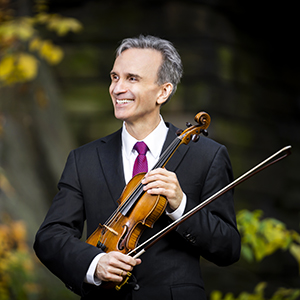 Gil Shaham is one of the foremost violinists of our time: his flawless technique combined with his inimitable warmth and generosity of spirit has solidified his renown as an American master. He is sought after throughout the world for concerto appearances with leading orchestras and conductors, and regularly gives recitals and appears with ensembles on the world’s great concert stages and at the most prestigious festivals.

Highlights of recent years include a recording and performances of J.S. Bach’s complete sonatas and partitas for solo violin and recitals with his long time duo partner pianist, Akira Eguchi. He regularly appears with the Berlin Philharmonic, Boston, Chicago, and San Francisco Symphonies, the Israel Philharmonic, Los Angeles Philharmonic, New York Philharmonic, Orchestre de Paris, and in multi-year residencies with the Orchestras of Montreal, Stuttgart and Singapore.

Mr. Shaham has more than two dozen concerto and solo CDs to his name, earning multiple Grammys, a Grand Prix du Disque, Diapason d’Or, and Gramophone Editor’s Choice. His most recent recording in the series 1930s Violin Concertos Vol. 2 was nominated for a Grammy Award. He will release a new recording of Beethoven and Brahms Concertos with The Knights in 2020.

Mr. Shaham was awarded an Avery Fisher Career Grant in 1990, and in 2008, received the coveted Avery Fisher Prize. In 2012, he was named “Instrumentalist of the Year” by Musical America. He plays the 1699 “Countess Polignac” Stradivarius, and lives in New York City with his wife, violinist Adele Anthony, and their three children.

Gil Shaham’s appearance is made possible by: